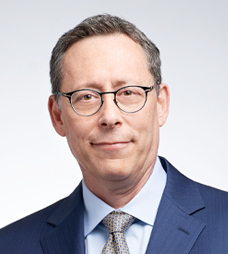 Leon I. Finkel is the managing partner of Berger Schatz. Mr. Finkel joined the firm in its founding year, 1987, and has been a partner since 1996.

Mr. Finkel is an experienced and highly acclaimed litigator who regularly represents individuals in trials and appeals. In March 2017, Mr. Finkel led a Berger Schatz team that won a significant victory before the Illinois Supreme Court, obtaining a ruling that clarified the legal standard for attorney’s fee awards in matrimonial cases (In re the Former Marriage of Heroy, March 23, 2016). (Click here to view the opinion.) He has successfully represented clients in a number of notable appeals, including In re the Marriage of Newton (Illinois 1st Dist., 2011), regarding disqualification of attorneys because of a conflict of interest; In re the Marriage of Heroy (Illinois 1st Dist., 2008), the highest maintenance award ever to be affirmed on appeal in Illinois; and In re the Matter of Visitation with C.B.L. (Illinois 1st Dist., 2000), the leading case in Illinois on visitation rights for same sex partners.

Mr. Finkel is a member of the American Bar Association and the Illinois State Bar Association (Family Law Section). He is a Fellow and former Member of the Board of Managers of the American Academy of Matrimonial Lawyers (Illinois Chapter), and has been selected for inclusion in Illinois Super Lawyers and has been named a Leading Lawyer each year since the inception of those designations. Mr. Finkel is among a distinct group of family law attorneys to have been selected as one of the Top 100 Attorneys in Illinois by both Leading Lawyers and Super Lawyers® in multiple years. He was featured in an article in the 2016 Leading Lawyers Magazine. He has also been selected by his peers for inclusion in The Best Lawyers in America® since 2014. Mr. Finkel is one of a select group of attorneys to earn a peer rating of AV® Preeminent™ by Martindale Hubble®, its highest designation. While in law school, he was a recipient of the American Jurisprudence Award for Family Law.

A frequently published author, Mr. Finkel has written articles on numerous topics, including termination of maintenance upon cohabitation, depositions, motions, business assets and child support orders, among others.

Mr. Finkel is admitted to practice in Illinois.

In 2016 and 2017, Mr. Finkel lectured at the Illinois Institute for Continuing Legal Education regarding Business Valuation, Financial and Tax Issues in Divorce.

In 2018, Mr. Finkel spoke at Hinshaw & Culbertson, Levenfeld Pearlstein, Saul Ewing Arnstein & Lehr, as well as at the accounting firm, FGMK, regarding Protecting Your Client’s Business in the Event of a Divorce.

“Divorce Planning is Critical for Your Business-Owner Clients,” Stout, March 2019

“Addressing Prenups in the Age of Same-Sex Couples,” Chicago Lawyer Magazine, May 2014

“Taking the force out of divorce,” Crain’s Chicago Business, May 2010

“Unraveling the Confusion of When Judgments are Stayed by Motions to Reconsider,” Illinois Bar Journal, March 2007